Zeus 1000 is a game which has been dedicated to the ruler of Olympus, the main god of Ancient Greece, Zeus himself. It’s actually one of four slots that WMS has created based on it, along with the likes of Zeus, Zeus 3 and Zeus God of Thunder. They certainly seem to like this god, but the players enjoy these slots as well, or there wouldn’t be four of them released.

This is one of those WMS slots which feature two sets of reels, of different sizes, with 5×4 and 5×12 game areas, plus 100 active lines. There will be wild symbols which can be transferred between game areas, scatters which will trigger free spins, or big rewards of up to $250,000 in a single round.

Betting will be done with a single coin for every 2 active lines. You can pick 20 to 100 active lines, and your bets will subsequently be required to have 10 to 50 coins in them. The choice of the coin value is also yours, and the range of $0.01 to $5 will be used for that purpose. The complete betting range, depending on your choices in the two areas I mentioned, will be $0.10 to $250.

They’ve announced a good-sized RTP in this case, which at 96% is as good as I hope any new slot to be (I’m actually hoping for higher than that, but that’s a good figure).

For starters, you’re going to find that the game stands out because of the way it’s built, with the two game areas, one of which is considered colossal. There is more though, so keep reading to find out what the slot offers.

One of the higher paying symbols in Zeus 1000, even though it’s not much to be impressed with, the wild Temple is going to form combinations and offer as much as 100x. It’s the same amount that you can get from five Zeus symbols. These wilds are only going to land on the regular reel set, and it will be used as a substitute for any type of regular symbol.

As the wild symbol lands stacked in the first game area, it can happen at times that it will end up covering all four positions of a reel. When that happens, you will get the wilds transferred to the corresponding reel from the colossal set, and they will expand to cover all 12 positions there. Bonus symbols appearing on this set of reels will be shown as a Wonus (a Bonus that is also Wild).

The Bonus symbols, scattered on three to six reels from both game areas (reels 1, 3 and 5 from each one), will trigger for you the free spins. You win 10 to 30 free spins, plus a reward of 2x to 25x the stake.

During the free games, the appearance of four stacked Zeus symbols on the 1st reel of the main set will transform the Zeus icons into Zeus ADD.  For each spin, 400 to 1000 Zeus ADD symbols will be added to all the reels, except the first one. The odds of forming top winning combinations are obviously increased considerably. 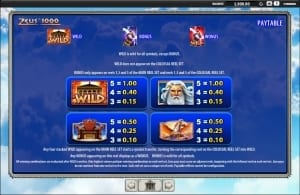 The connection to the gods of Olympus means that you’re going to see clouds and mountain tops in the background image, while on the reels the mix of symbols will be of Zeus icons, his throne, Pegasus, helmets of soldiers, but also more Royals than I care to see. The graphics are acceptable, as is often the case with WMS, but I almost never end up impressed with them.

Zeus 1000 is a decent game in the collection of slots that WMS has dedicated to the Ancient Greece god, with a type of gameplay which is typical for them and with a good RTP.