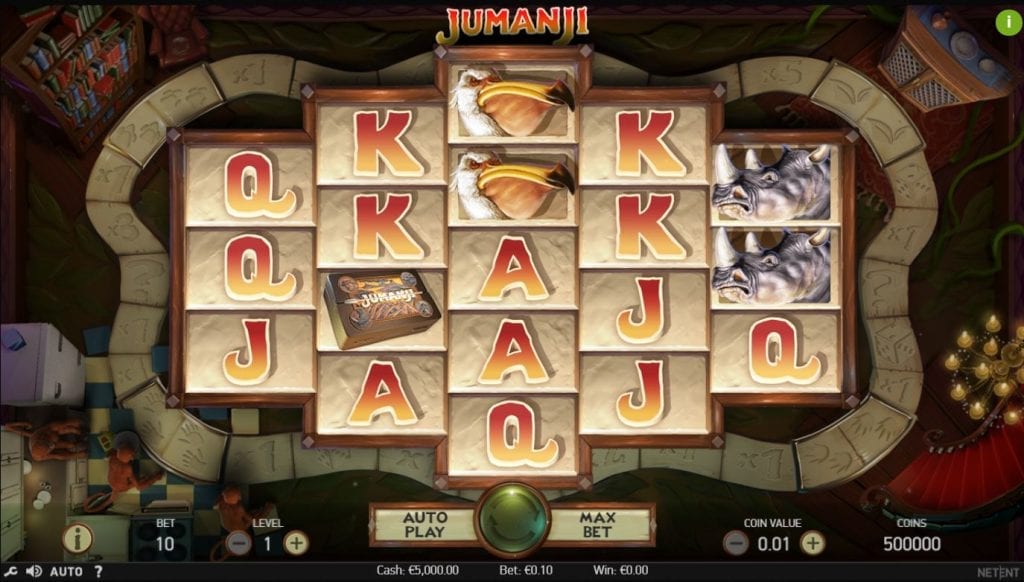 Jumanji has the NetEnt brand behind it, so it’s a game that we’ve been expecting and having high hopes for. The inspiration for this branded release is coming from the Jumanji series of films, the first one being released in 1995, while the second title came out in 2017.

NetEnt went a different route in Jumanji, using the usual 5 reels but with the number of symbols being 3-4-5-4-3. 36 fixed lines are available for this game setup. Expect to find four different random features that are mostly based on wilds, as well as a scatter-triggered board game which eventually results in free spins with different extras. All the while, you’re hoping for the ultimate payout, of up to 504x the stake. 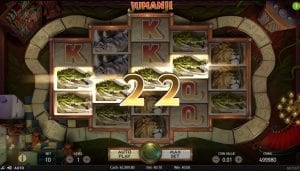 NetEnt went with a low to medium volatility game in this case, and that seems to be their strategy most of the time. Though individual wins aren’t very high, you do spend your money only on 10 out of 36 lines, the others being freebies.

RTP wise, the game sits at 96.33%, which is what NetEnt calculates for its entire lifetime, not any particular gaming session.

The games that are coming from NetEnt always seem to excel when it comes to features and graphics, and the former is especially true in this case. There are several types of random features for the base game, as well as extra features for the free spins, along with the usual scatters or wilds.

In addition to the Wild Logo, which is your regular wild feature in Jumanji, there are various other types of wilds which are going to result from the different bonuses that will trigger in the game. Regardless of their different mechanics which allow them to do extra things, they will all share the ability to be substitutes for regular symbols and to contribute to new winning combinations this way. 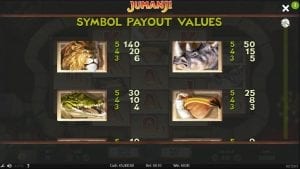 A total of four features may trigger at random, during the paid spins:

Sticky Vines: it will give you re-spins, during which symbols from winning combinations and wilds will be sticky. The aim is to increase the wins.

Monsoon Wilds: the game adds 1-2 wild reels, and if the 5th reel is one of them, then you’re guaranteed to have 2 columns covered with such symbols.

Monkey Mayhem: shuffles symbols around, to create a winning combination.

Wild Stampede: a herd of rhinos will stampede and go over the reels, giving you 4 to 9 extra wilds.

Board Game With Free Spins

To reach the main feature of Jumanji, you will need the standard scatters, symbols which only have to appear in view 3 or more times to get you access. The number of scatters also decides how many dice rolls you get in the upcoming board game, 6 to 8 being possible.

The Board Game stage of the feature gives you tokens to pick and have represent you, and then the dice rolls will take you across the board. You can win one of the four types of free spins, additional dice rolls, cash prizes or the Mystery feature.

Vines Free Games: 10 free spins with re-spins offered for all winning rounds, where wilds are sticky.

Monsoon Free Games: 7 free spins with 1-2 wild reels added to each round.

Stampede Free Games: 5 free spins which have the Rhinos Stampede across the reels to add up to 9 wilds each time.

The main inspiration for this game has come from the hugely popular film from 1995, though the 2017 version renewed the interest of the players in the franchise. You don’t have any of the movie’s actors, only images of logos, the board game, wild animals and playing cards. It looks unusual thanks to the way the reels were implemented, with 3 to 5 symbols on each one, but it’s very well designed.

Jumanji doesn’t require you to be a fan of the movie in order to have fun playing it. Don’t expect a huge payout from it, it’s a NetEnt release after all, but you do get a lot of features so variety is not a problem and the RTP is at 96.33%.