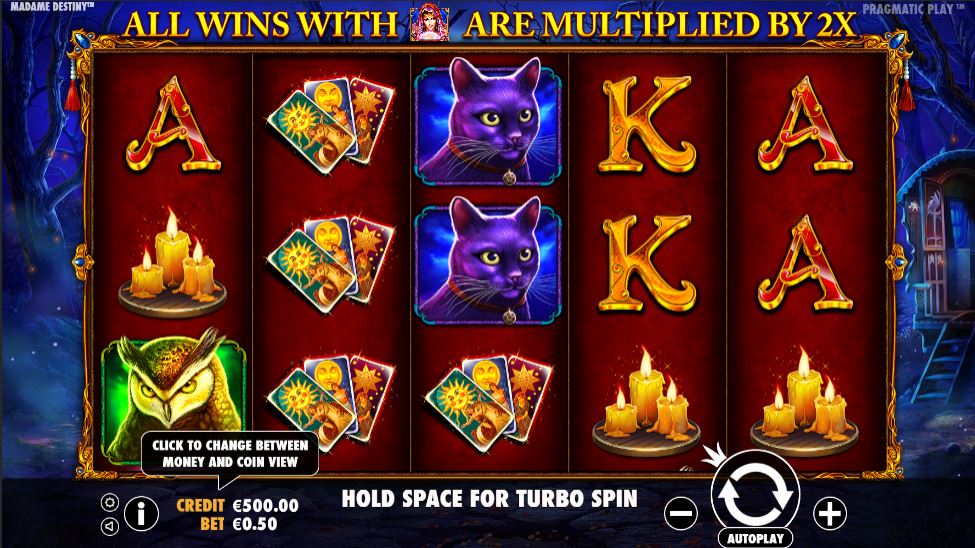 The idea of being prepared for what the future has in store for us seems to be something that we all have in common, and it’s probably the reason why fortune telling is such a common thing, for those that want to believe in it at least. Pragmatic Play came up with their own version of this popular theme, and they implemented it in a slot machine that manages to look better than their average release. Madame Destiny is that game.

While featuring only 10 active lines for a game area which occupies 5×3 symbol positions, Madame Destiny will end up as a highly volatile game, offering the kind of experience that will appeal to pro players most of all. Big rewards, as high as $135,000, offered in exchange for just five matching symbols, will be made available inside. There are also the wilds, scatters or free spins with multipliers that you’re craving for, to help out the game increase its potential.

If you’ve played one Pragmatic Play slot, then you’re likely to know what it will offer in this area already. They share the same betting system between them, with 1 to 10 coins usable per line, while denominations stop at just $0.50. For a game that delivers 10 active lines, this gets you a betting range of $0.10 to $50. 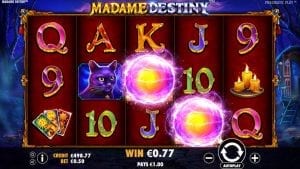 This is one of the areas where the game truly shines. It will deliver a win of 9,000x for the base game, and that’s a generous offer already. Triple that amount once you get to the free spins, to 27,000x the line bet, or as much as $135,000 that you can win with just five wilds on an active line.

Volatility wise, it’s a game with a High rating, which means that most players shouldn’t expect a lot of wins, but that big rewards can be offered in a shorter time span. It’s not a game for the faint of heart.

As for the RTP, that gives you an idea of the slot’s potential as well, but it’s a lot less reliable than in low volatility slots, since game sessions can be all over the place. Still, Pragmatic Play set it up with a 96.5% RTP that sounds pretty good.

In terms of features that are available in this game, for the most part they are going to be the usual ones. The difference is that their multipliers can be applied to the already high jackpots, and the results can be impressive.

The fortune teller, Madame Destiny as the game calls her, will be the face of the wild feature in this case. Have these symbols appear on active lines, and if they find themselves next to some matching regulars, they could very well end up forming new combinations together. The wild will apply a 2x multiplier and will double the wins in question.

Ideally, you’d have only wilds occupying an entire active line though, since the jackpot is offered via its own combination. Five Madame Destiny wilds can pay up to $45,000 in the base game, or as much as $135,000 in a free spin.

This is another fairly typical feature for the slot machines of our times, but it’s been made a lot more exciting thanks to the use of multipliers. For starters, let’s see how you trigger the free spins though. 15 rounds are offered in exchange for any appearance of 3 or more scattered Crystal Orbs. Besides the fact that all wins get tripled in value via the 3x multiplier of the free spins, the feature can also be retriggered.
This is the part of the game that has the highest potential, where you can get huge rewards and which contribute quite a bit to the overall RTP. 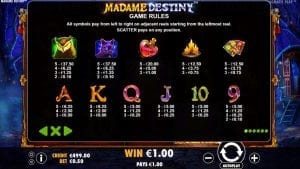 If we look at the choice of theme, I don’t think you will be necessarily impressed with Pragmatic Play’s choice here. Madame Destiny and its fortune teller story is far from unique, with probably about a dozen other slots featuring the same theme out there. Still, it’s a better than average design for this developer, and it’s a decent looking slot, so there are good reasons to play it if you like having pretty graphics in your games.

Getting to the symbols which are employed on the reels, Madame Destiny is one of them, the Crystal Orb is another, and once you get to the regulars you will find Owls, Black Cats, Vials of Blood, Candles, Tarot Cards and half a dozen Royals.

Madame Destiny delivers big rewards, a highly volatile environment and some exciting features if you manage to trigger them. You don’t need to be a fan of the fortune teller theme to enjoy this game, but you should be a fan of highly volatile titles.