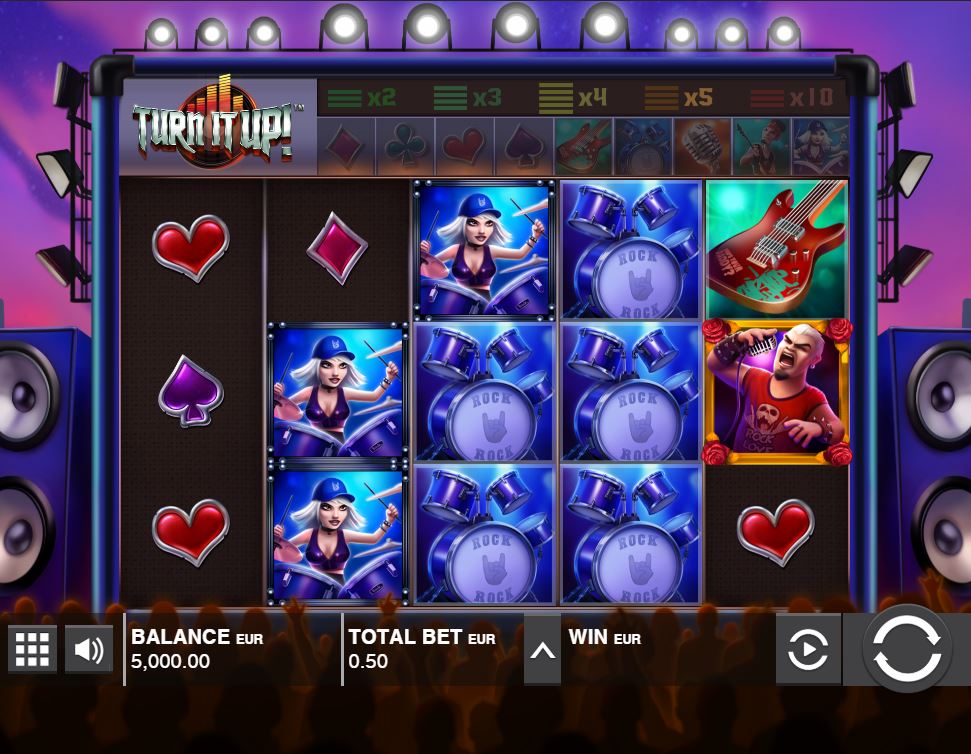 This is far from being the first time that rock music has managed to inspire a developer to release a slot machine that’s based on it. There are typically a couple of such games launched each year, and sometimes there are even branded slots being offered in this area. Push Gaming’s Turn It Up is taking the action in the middle of a rock concert, and it uses high-end graphics and cool new features to make the spins enjoyable.

Turn It Up might have 5×3 reels, but there will also be only 10 active lines in that game area. Have the right combo form up there, to win $2,500 on a single line. At the same time, you can expect to get access to wild symbols via the Wild Conversion Enhancer, or to experience features like the Symbol Removal Enhancer or Multiplier Enhancer. Don’t get spooked by all the new terms, the game also offers some classics, like scatters or free spins.

If you click on the arrow that’s to the right of the Total Bet, you will get the betting screen, with its dozen options. The smallest one is $0.10, the highest one is $100. Whatever value you select, it will apply to 10 active lines, using $0.01 to $10 on each one.

Turn it Up Jackpot 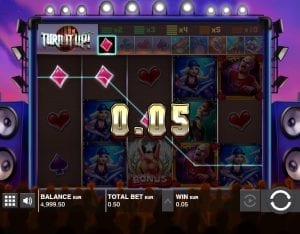 The paytable’s values will not feel impressive at first, not with a 250x jackpot being offered through the slot’s best combinations. That $2,500 top reward can be turned into as much as $25,000 though, once the Multiplier Enhancer feature gets involved. That’s just from one winning combo, and with 10 lines doing the same thing the slot could go as high as $250,000 with its rewards.

96.51% is the Return to Player that has been set up for Turn It Up. You will get a medium volatility game here, so you don’t lose as often as you would in a high volatility title, and you get decent sized rewards often enough.

While this isn’t your typical rock themed game, not in terms of features at least, there are some standard options as well inside, like the wild or the free spins.

Featuring a very appropriate Golden Skull that’s surrounded by red roses, the wild symbol is one of two that can pay the 250x jackpot of the slot if it forms a combo. Otherwise, you’re much more likely to have it appear at random and act as a substitute for whatever regular symbols are found next to it. These wilds are placed on the reels via the Wild Conversion Enhancer feature.

Three types of Reel Enhancers are employed in the game. These are collected as you play the game and you go through consecutive rounds without wins in them. Each time you get one of these non-winning rounds, a feature is picked at random and added. Once you get a winning spin, the reel enhancers in question will be removed, and you start from scratch again.

Wild Conversion Enhancer: will convert highlighted symbols into wilds, wherever they are on the reels.

Symbol Removal Enhancer: applies to the next round and removes all symbols of that type from the reels.

Multiplier Enhancer: can give you a multiplier as high as 10x, to use on the next winning round.

Moving on to the free spins, these are activated through the standard scatters appearing on three reels. Only three are available, on the 1st, 3rd and 5th columns. They get you 5 free spins, and after each one that doesn’t have a win inside there is a Reel Enhancer that’s collected. The difference is that these Enhancers don’t get removed once you’ve obtained your winning round.

One More Win: as the initial 5 free spins are done, this new feature comes in. You get extra free spins and you continue to collect Reel Enhancers until you hit a win. 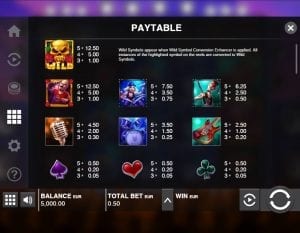 One of the better parts of this game would definitely be its design. Inspired by rock music and taking place at a concert with a huge crowd attending, the reels are placed on the stage and they’re flanked by huge speakers. Besides the skull of the wild symbol and the card suits that pay least, the other symbols show us the three members of the band and their tools of the trade (microphone, drums and electric guitar). Push Gaming does cartoon-style graphics quite well, and generally I end up enjoying most of their content.

Push Gaming hits another winner with Turn It Up, their very own rock music themed slot. Its features make it interesting most of all, and with up to 10x multipliers possible, I’m sure that everyone will agree.